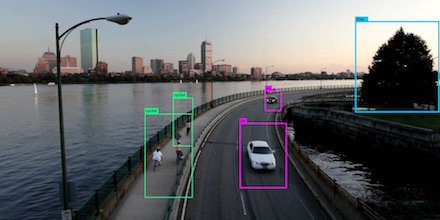 Neurala’s Brains for Bots will enable drone makers and service providers to build applications for autonomous inspections, avoiding obstacles, following selected people or objects, and more without specialized hardware (such as power-hungry active sensors and LIDAR).  Neurala software uses an ordinary camera for machine vision, and can work on a variety of computing hardware.

Some drones and announced products have claimed limited autonomy. However, unlike Neurala’s on-board capabilities, they require help from a connected device, such as an iPad (like our own Selfie Dronie), or work by following a cell phone or a signal from some specialized device.  The problem for these competitive solutions is that communications delays and reliability issues make true autonomy unusable in many situations.

Teal Drone (www.tealdrones.com), the world’s fastest production drone, is the first drone maker to announce that it will incorporate Neurala Brains for Bots software for deep learning and image recognition.  The Neurala software, under the brand name Neurala Follow, will enable the drone to autonomously follow people or objects using vision from the Teal Drone camera.  Teal Drone incorporates the NVIDIA Jetson TX-1 module and will ship with Neurala Follow built in.

The major capabilities of Neurala Brains for Bots SDK are the following:

Recognize: Identifies learned objects and learned object classes when it sees them anywhere in the real-time video stream. The Neurala Brains for Bots SDK provides the label (name) given to the object or object class, along with a likelihood estimate.

Find: Simultaneously recognizes and provides the location of learned objects or object classes when it sees them anywhere in the real-time video stream. The Neurala SDK provides the label (name), likelihood estimate and on-screen coordinates.

Follow: Tracks the movement of recognized objects from frame to frame in the live video stream with updated coordinates. Information can be easily converted using the supplied tools to left/right, up/down and forward/back motor commands.

“We are disrupting the market.  You don’t need expensive equipment or server access to build autonomy and object recognition into a drone application.  You can buy an industry standard drone components, add our software, and achieve state-of-the-art performance leveraging Deep Learning and AI in your drone out-of-the-box,” said Massimiliano Versace, Neurala CEO.

Neurala is a Boston-based robotics company known for its high-end robotic intelligence software designed for use by NASA and the US Air Force.