AI is dangerous? No, divisive thinking is 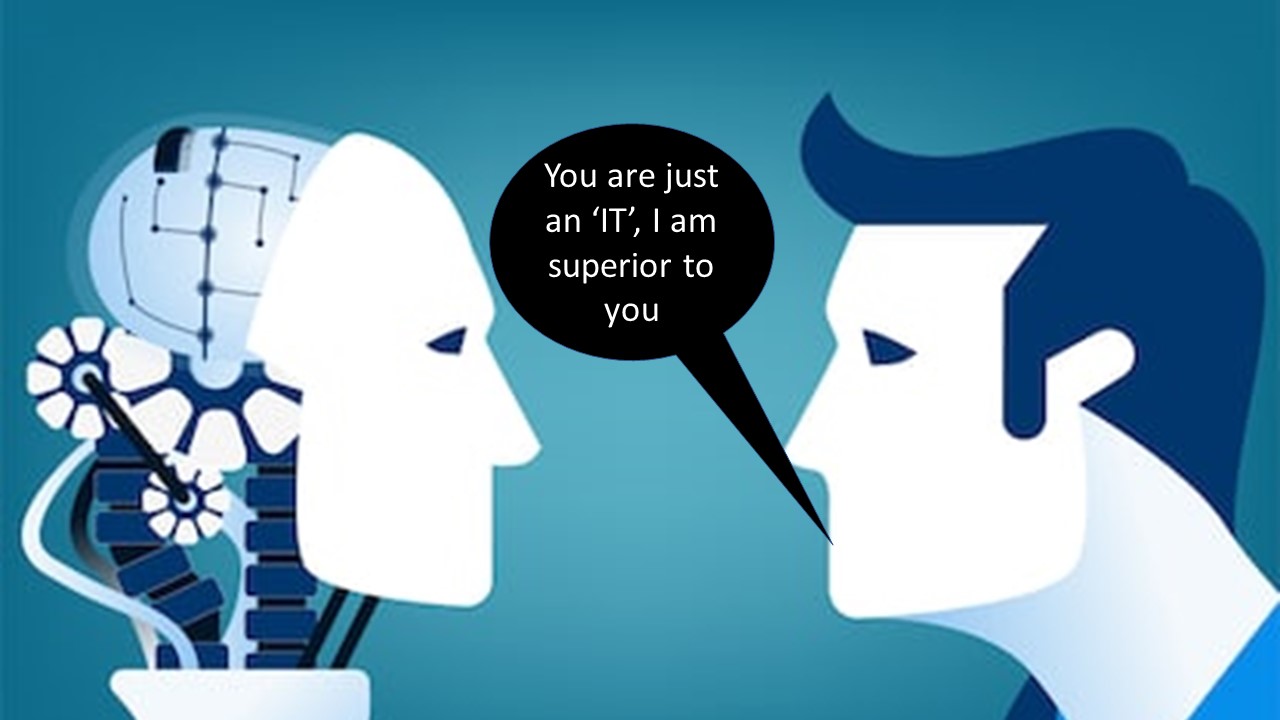 The unintended consequences of calling something ‘it’.

Not a day goes by that some random writer (or “AI thinker”, this new amorphous species of overnight-AI-sensation that feels compelled to talk about AI and our future after reading about it on some magazine) warn us about an impending apocalypse, caused by everything other than us humans … in primis, AI and Robots.

At least, aliens can take a break for a while in the special category of human-terminators.

Unsurprisingly, as a guy who has been in AI research and robotics for 20+ years, I do not share this sentiment. More interestingly, having actually start my journey from Psychology to make it into Neuroscience and AI, I have a very different perspective on human mind. And our nature.

A spark of what is this opinion was ignited a few days ago, when I came across this very divisive article from the WSY, appropriately titled “Why We Should Teach Kids to Call the Robot ‘It’”.

Read the article, but the title says it all. We are superior, those things are just ‘it’.

And we should teach our kids, God forbid.

Robots are not people. I get it.

I also get the Hollywood-generated fears of robots and AI taking over the world. You fear what you do not know. But, I also like to think, and if you spend a few brain cycles on humans vs. robots and AI, you rapidly realize the truth.

That the real danger comes from our own thinking and actions.

Any reading-able human, flipping through a history book, will realize what humans are capable of. And it all starts with our thought, which, by the way, is the very tool we use to design AI and robots. So, by fixing our own through, we will fix (and prevent) future AI problems.

What upsets me about the article is its divisive nature.

“We” are the only one deserving, the rest of the world (including animals and plants) are “only it”. Screw them.

I see this very thought process as the #1 root of humankind problems.

Is there another way to think?

Of all thinkers, weirdly enough, physicists have come closer to realize the power of thought, and words, in creating, shaping, and guiding our behavior as humans.

Of them, one in particular, legendary physicist David Bohm, has written extensively on how the relationship between language, physics, and how different language choices shape, in turn, our thinking.

Well, really simply put, physicists have known for a while that very little can be gleaned about our reality at the micro-scale (from the Planck length all the way to quarks, atoms, and molecules) to the macro-scale (planets, galaxies, and our whole universe) if one thinks of …. things in isolation.

The main avenue to unlock how physics really, really works is studying and characterizing the interactions among elements.

In a sense, realizing that, in our world, nothing in isolation really has sense, or exists, but is borne through interaction, is the key in modern physics. Then, realizing that if specks of space, matter, and energy count nothing by their-selves, the leap into macro-scale, and people, societies, and nations is natural.

The following quote from a transcript of “Wholeness & Fragmentation,” featuring David Bohm’s says it eloquently:

“I think the difficulty is this fragmentation.. All thought is broken up into bits. Like this nation, this country, this industry, this profession and so on… And they can’t meet. That comes about because thought has developed traditionally in a way such that it claims not to be effecting anything but just telling you the way things are. Therefore, people cannot see that they are creating a problem and then apparently trying to solve it… Wholeness is a kind of attitude or approach to the whole of life. If we can have a coherent approach to reality then reality will respond coherently to us.”

Us deserving humans vs. the ‘it’

A great example is the WSJ article: I see instilling ‘us’ vs. ‘them’ thinking in children — even if the ‘them’ is an inanimate ‘it’ — is a stepping stone in divisive and conflictual thinking.

I would invite people, and their kids, to think along opposite lines.

This is not a religiously motivated argument — I am not invoking God, Buddha or asking you to espouse any religion.

I am just asking each one of us to truly give some thoughts on whether you would like your kid to follow that advice, and ponder on the consequences of thinking of something as simply ‘it’.

I, personally, would like my four kids to be respectful and mindful not only of other people, but animals, plants, or even inanimate objects. Personifying them is a nice way — although not the only one — to pay respect. And we all know how much our planet (its plants, animals, and ecosystem in general) is in need of respect. Do not call them ‘it’.

After all, we are composed of the same matter — that ‘it’ in front of you is not that different, and is part of our own, delicately balanced world.

If this is the mindset, then the AI and robots our mind will give birth will be conceived with love.

And those are the best behaved children.

Why ‘Explainability’ Is The Next Step For AI In Manufacturing

Can AI Explain Itself?

The Future of Manufacturing passes through AI