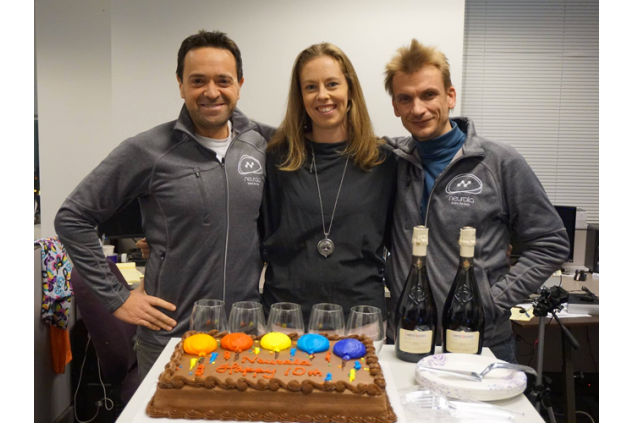 Based on work originally developed for NASA, ‘The Neurala Brain’ enables a new generation of smart products that learn, adapt and interact with their environment in real time.

BOSTON—January 18, 2017—Neurala, the software company that has invented The Neurala Brain, a deep learning neural networks platform that is making smart products like toys, cameras and self-driving cars more autonomous, interactive and useful, today announced the closing of a $14 million series A funding round.

The round was led by Pelion Venture Partners, with participation from Sherpa Capital, Motorola Solutions Venture Capital, 360 Capital Partners, Draper Associates Investments, SK Ventures, and Idinvest Partners through its Electranova Capital II Fund and in partnership with Ecomobility Ventures. Both 360 Capital Partners and Draper Associates also provided seed funding.  Neurala will use the capital to accelerate servicing of its rapidly increasing customer demand, as well as to revolutionize additional application areas by adding built-in intelligence and autonomous behavior.

“The Neurala Brain was designed from the beginning to transform industries,” said Massimiliano “Max” Versace, co-founder and CEO of Neurala.  “Bio-inspired brainpower can be built right into drones, cars, toys, cameras, and other devices found in the home so that they can learn, see and act. This is essential for applications like drones and self-driving cars, where reaction time is critical and where you can’t always get fast network access. It’s also an endearing capability when built into toys that recognize their young owners by sight and give them a smile without communicating with a server.”

Neurala pioneered the development of deep learning neural network software for NASA to use in planetary exploration, where processing power, battery life and communications are limited.  Instead of designing deep learning neural networks for super computers, as other companies do, The Neurala Brain was designed to work where the decisions need to be made. Today, Neurala has customers deploying a broad range of applications, including autonomous drones and cars.  Customers include Teal Drones, Parrot and multiple members of the Fortune Global 500. Neurala is currently working with Motorola Solutions on new applications of video, image and audio analytics for public safety.

Neurala’s neural network software uses a bio-inspired approach to mimic the way the human brain learns and analyzes its environment. This software enables a variety of smart products—from self-driving cars and industrial drones to toys, consumer electronics and smart cameras—to learn, adapt and interact in real time. With The Neurala Brain, toys can learn to identify their owners, security cameras can identify specific threats, drones can “learn” how to diagnose problems at the tops of cell towers, saving humans considerable danger and drudgery, and self-driving cars can be safer and learn to avoid obstacles.

One significant differentiator of Neurala’s deep learning software is that it scales from embedded hardware to powerful servers. Neurala calls this an “Anywhere Brain.” By operating “on the edge” and locally on the device, toys can entertain without communicating personal information to a third party, and applications like self-driving cars need not rely on the internet—which can be slow or unavailable—to avoid accidents.

Neurala’s software development kit (SDK) supports industry-standard NVIDIA, ARM and Intel processors, so teams can develop for the processor that is best for their product instead of being forced to select a high-priced proprietary processor.

“Motorola Solutions is constantly seeking ways to accelerate technology innovation for our public safety and commercial customers, who work in demanding and often dangerous environments ,” said Paul Steinberg, Chief Technology Officer, Motorola Solutions. “Neurala brings advanced deep learning capabilities that will enable us to further explore the potential of artificial intelligence to augment our customers’ experiences ‘at the edge. ’ This has the power to do things like h elp police find a missing person faster or guide a field worker’s maintenance activities by turning their body -worn camera into a sensor that can recognize actionable information in video and images—in real time at the edge .”

“Almost every application on earth can benefit from becoming smarter,” said Tim Draper, well-known venture capitalist and founder of Draper Associates. “Neurala is the only platform that enables products to see and react in their worlds, with fast, local, real-time learning. It’s already driving innovative new intelligent hardware applications even as it makes current ones more efficient, with greater financial feasibility.”

“Pelion is a firm that believes in a future in which automobiles, robots, drones and other mobile hardware devices will need to navigate the world autonomously and safely, and we believe that Neurala has the right solution to enable that future,” said Senior Associate Ben Lambert of Pelion Venture Partners. “Neurala’s executives have a deep technology background and have been leading development efforts in this industry since 2006. As a result, the company is far ahead of its competitors and is at the forefront of the deep learning and computer vision space.”

“Neurala technology is already achieving great traction in Europe. We will be able to help the company’s founders build upon that momentum to accelerate growth,” said Idinvest Director Julien Mialaret. “Our fund sponsors have ideas for ways to deploy Neurala’s exciting technology.”

Neurala, Inc. (https://www.neurala.com) is a software company that developed The Neurala Brain— deep learning neural network software that makes smart products like inspection cameras, robots, drones, toys, consumer electronics and self-driving cars more autonomous, engaging and useful. Neurala provides off-the-shelf and customized solutions spanning the world’s highest-end applications to inexpensive everyday consumer products. With the Neurala Brains for Bots Software Development Kit (SDK) and an ordinary camera, products can learn people and objects, recognize them in a video stream, locate them in the video and follow them as they move.  The company has raised a total of $16 million in funding from Pelion Venture Partners, Sherpa Capital, Motorola Solutions Venture Capital, 360 Capital Partners, Draper Associates Investments, SK Ventures, TechStars and Idinvest Partners. The Neurala Brain technology is based on technology originally developed for NASA and the U.S. Air Force. Follow Neurala on Twitter at @Neurala, on Facebook at www.facebook.com/neurala, on YouTube at www.youtube.com/c/NeuralaTV or LinkedIn at https://www.linkedin.com/company/neurala.

Pelion Venture Partners is an early stage technology venture capital firm with a national track record of investing in software-based businesses that manage the exponential growth in the movement of information, or “bits,” across wired and wireless networks. Founded in 1986, Pelion has been a partner to leading technology innovators CloudFlare, Fusion-io, Integral Ad Science, Dino, RedHat, and Riverbed. For more information, visit www.pelionvp.com.

Idinvest Partners, with assets under management of over €7 billion, is the largest venture capital investor in continental Europe and one of the most active investors in the European mid-market segment. Idinvest has supported over 160 high-tech companies to date and has specific expertise in information technologies (internet/media, software and telecommunications), new energy and environmental technologies, mobility and healthcare (biopharmaceuticals, diagnostics and medical instruments).

Ecomobility Ventures is an investment fund dedicated to sustainable mobility sponsored by SNCF, Total, Orange, Air Liquide and Michelin. Ecomobility Ventures is positioned as a long-term partner for pioneering young companies. Its objective is to support a dozen start-ups aspiring to become the leaders of tomorrow.